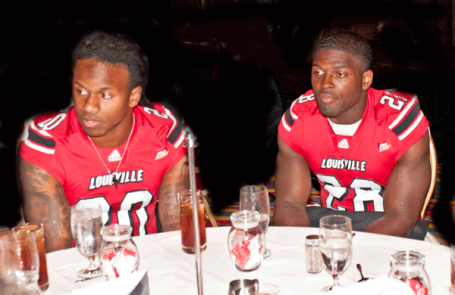 U of L running backs Victor Anderson and Jeremy Wright were ready for dessert, along with 1,198 other attendees during the annual Kickoff Luncheon at the Marriott Downtown.

If Charlie Strong is focused on you, asking you to do something, you’re going to go all out, no matter how old and out shape you may be. One simply doesn’t refuse the man.

Maybe that’s why U of L President Jim Ramsey and Vice President of Athletics Tom Jurich have never said no to anything Strong has requested since taking over the program last year. “I want to thank them for all their support and for giving me the opportunity to coach this program,” he said. “I am so honored to be a part ot it.”

Strong was motivating again Tuesday, discussing a no-nonsense approach that left many in the packed room of 1,200 people ready to put on the pads. Like during the game at Oregon State last season when U of L was down 28-14 early in the third quarter.

U of L came back to close the gap to 35-28 in the fourth quarter and was en route to tying the score as time ran off the clock.

It’s an attitude that permeates the current U of L staff. No excuses accepted, including lack of experience.

“Young people today want to be good, they want to be validated,” he said. “But you have to let them know what’s expected of them, Demand it, and they will respond.”

2 thoughts on “Charlie Strong wants all you got”