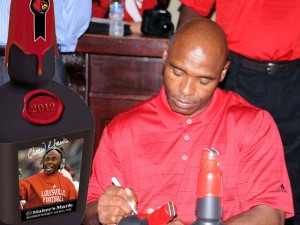 With the opening of football practice two days away, the last place Charlie Strong wanted to be was stuck behind a table signing autographs.

But there he was Wednesday at the Mellwood Arts Center signing limited edition Maker’s Mark bottles for the approximately 700 University of Louisville football followers jammed into the facility.

The environment resembled Fort Knox with the doors under guard and the crowd tightly monitored. The Pep Band, under Al Greener, was doing its best to liven up the atmosphere despite all the security. Nice try, Al, but one can only do so much.

Fans were lined up Walt Disney World-style, winding around six or seven rows. The signing table resembled a production line, with Strong, Tom Jurich and the Maker’s Mark people with their Sharpies, dutifully applying their signatures.