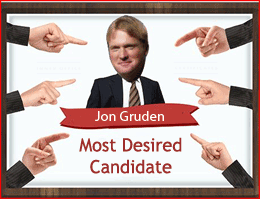 Okay, if one assumes that rumors that Jon Gruden is in discussions about becoming the next University of Louisville football coach have substance, just what would U of L fans be getting if talks are successful.

With all these credentials, however, comes a significant challenge. Gruden will always be among the top three candidates for any coaching job that becomes vacant — college or professional. He already is at the top of list of numerous competing interests, possibly including Notre Dame.

Louisville will have to have deep pockets to attract and retain him. The bidding wars have already begun.

26 thoughts on “Careful What You Wish For”