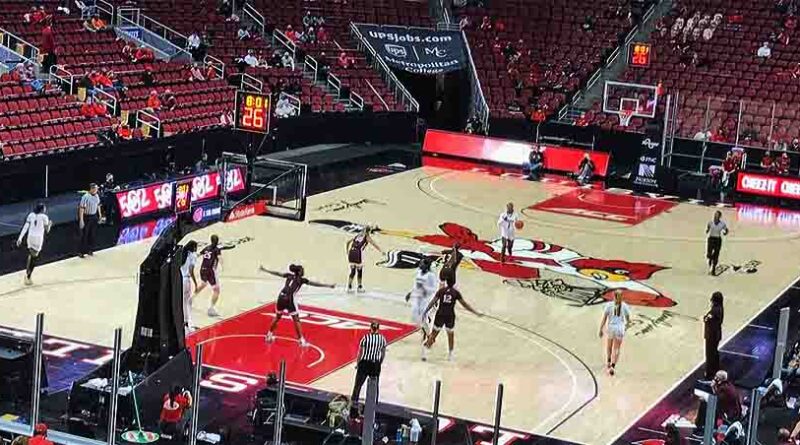 Living life on the edge.

Never thought the Observer would see a day when attending a University of Louisville basketball game would be risky behavior. Finally getting away from the friendly confines of home, making it down to the KFC Yum! Center on Sunday.

Precarious behavior in his age group. But, boy, is he ever cautious, avoiding human contact like the plague it is these days.

The 22,000-seat arena is more like an echo chamber with an estimated 3,000 fans allowed into game because of the COVID-19 pandemic. The quiet atmosphere more reminiscent of a hushed crowd of golf fans than a gathering of diehard basketball fanatics. The best they can do with all the restrictions — the face masks, the social distancing, the restraints on eating and fraternizing — is a smattering of polite applause, no matter what is happening on the court.

Few of the niceties of a normal basketball event. Fans have to subject themselves to temperature checks, then wait for the results before entering. Sportswriters and bloggers required to answer medical questionnaires before getting press passes. No Louisville cheerleaders or Ladybirds around, except for a couple of prerecorded videos on the jumbo scoreboards. No cartwheels, no pyramids, no back flips in today’s environment.

No concession stands are open. No Pepsi, no popcorn, no hot dogs, no hamburgers, no pizza, no peanuts. No food purchases whatsoever. Fortunately, the Observer had brought some Halloween leftovers with him, the Snickers and Milky Way fun bars, along with some cheese and crackers.

One really wonders whether it is permissible to eat at all, carefully scoping out security people and ushers before sneaking snacks behind the face mask.

Fans avoiding fellow fans, keeping their distance, not a lot of noise in the corridors. No high fives in the fan base where they originated. No UofL diehards raising their arms and leading C-A-R-D-S cheers. No sign either of Rob Hickman, who originated the tradition, for that matter. Probably playing it safe, watching the games from one of those ever-changing obscure TV channels at home.

The good old days, from not so long ago, just some happy memories for now. Things the fans love, often taking for granted, hopefully returning in the not-too-distant future.

The UofL women may have more overall talent they’ve enjoyed during the Jeff Walz’ 13-year career. That’s saying a lot from a program that has turned out the likes of Angel McCoughtry, Asia Durr, Myisha Hines-Allen and Shoni Schimmel.

Dana Evans and Hailey Van Lith may be the best combination of starting guards ever, scoring 20 points each in a 101-58 win over Eastern Kentucky University. Evans good for 7 out 16 shots from beyond the three while Van Lith was making 7 of 13. Evans coming through with seven assists while Van Lith was pulling down 11 rebounds. Evans, of course, was player of the year in the ACC last season. Van Lith, a high school All-American, is the real thing, living and breathing basketball most of her young life.

Olivia Cochran, a 6-foot-3 center from Columbus, Georgia, the embodiment of a powerful post player. Capable of muscling her way around the basket and possessing a nice variety of shots and post moves. She’s going to have quite a career.

The Louisville men may be much farther than anyone anticipated. Back in Rick Pitino’s day, one almost expected to have post players looking like they had never played the position. Par for the course, except the occasional exception like David Padgett.

Coach Chris Mack appears to have collected a contingent of players who know their way around the game, know what’s expected of them, and are going to be competitive.

Carlik Jones, the 6-foot-1 transfer from Radford University, brings back moves UofL hasn’t seen since Peyton Siva and Russ Smith. He also conveys the confidence of a player who knows what it takes to be successful, earning the trust and respect from his teammates. No disrespect to David Johnson, a sophomore from Trinity who stood out last season, but he’s almost lost in a crowd of talented players like Jae-Lyn Withers, Dre Davis, J.J. Traynor and Quinn Slavinski.

Unfortunate that the injury bug has reared its ugly head. Samuell Williamson looking better than he ever had before stubbing his toe against Seton Hall. Malik Williams coming back who knows when.