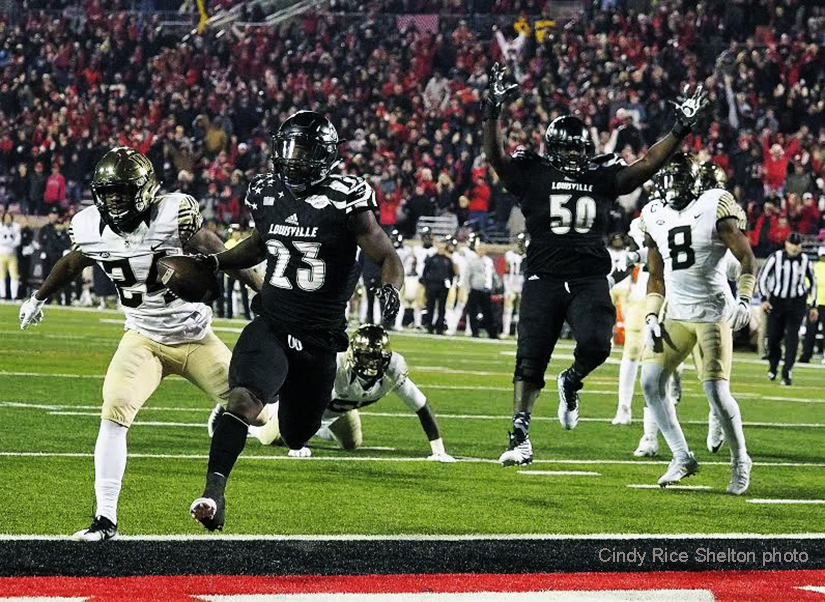 So much for the notion of the University of Louisville being a one-dimensional football team. Hopefully the college football playoff committee was taking notes.

On another night when receivers were dropping Lamar Jackson passes or watching the ball sail overhead or bounding in front of them, it fell to Brandon Radcliff to establish himself as a serious running threat again.

Jackson was struggling with his control much of the game, managing to connect on only 14 of 26 passes, all too human compiling only 146 total yards through the air and only one touchdown. Rushing for 153 yards but no touchdowns.

Notching few, if any, style points for the Heisman Trophy voters in this affair. Jackson would be sacked four times in the first half. The only thing that mattered going into the second half was to avoid suffering a defeat. “I was mad at myself,” said Jackson. “We needed to step it up. ”

Not concerned about the Heisman. “We can’t be thinking about that,” he said. “We weren’t playing our game. We started off slow, turnovers and stuff like that, we talked to other, motivated each other and that’s what we did.”

Another one of those games where UofL was favored to win handily by 35 points by the Las Vegas oddsmakers. Those people should know better by now. But there they were again, inspiring overconfidence for one team and an adrenaline boost for the underdog.

With the Wake Forest defense keying on Jackson’s every move, Radcliff would break loose time and time again, racking up a total of 141 yards. this night he was Mr. Indispensable, scoring on runs of 55, 7 and 19 yards in Louisville 44-12 win over Wake Forest.

Jackson getting off to another shaky start and that’s a concern, with some teams getting closer to figuring him out. Pay too much attention to Lamar, however, and Brandon Radcliff will make you pay.