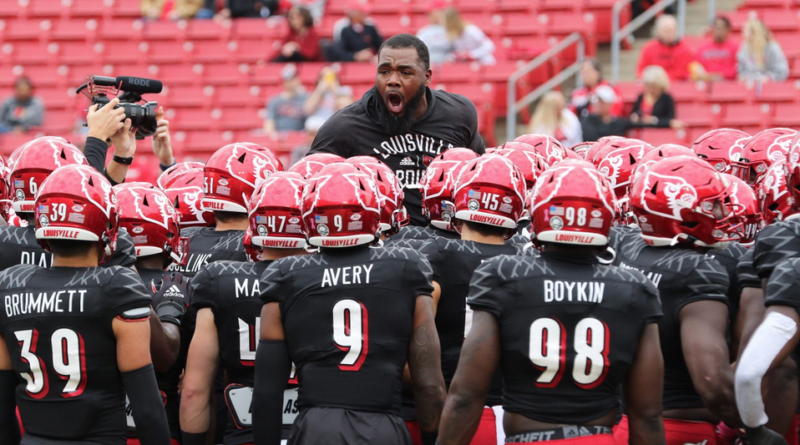 That big sigh of relief you heard on Floyd Street around 7 o’clock Saturday night was the University of Louisville football team’s fan base. Another close game came down to the fourth quarter. But this was different. UofL  prevails 28-14.

The Cardinals have played five straight games decided in the final minutes and seconds. That’s good and bad. The much criticized Louisville defense came up big this time, stuffing BC’s running game. Coordinator Bryan Brown’s defense limited the visitors to a combined 266 yards on offense. They were averaging 30 points per game coming into the contest.

However, when true freshman Trevion Cooley fumbled and Boston College recovered at the Cardinals 30 in the fourth quarter the faithful groaned, “Here we go again.” BC (4-3, 0-3) scored a touchdown to get within a touchdown with over six minutes to play. Here is where things were different.

The Cardinals drove right now the field for the clinching touchdown with quarterback Malik Cunningham scoring on a 14-yard run. Game over. Losing streak over.

Cunningham accumulated 133 yards rushing and three touchdowns. The junior from Montgomery, Alabama has 30 yards and over 2,000 yards rushing. “I’ve got the best seat in the house and I don’t know how he gets away,” said coach Scott Satterfield.

He’s starting to resemble another Louisville quarterback whose number eight will be retired in two weeks. He stops, spins, hesitates, gets away from defenders with regularity. When he gets near the goal line, it’s like he can’t be stopped.

“It’s incredible some of those runs he made tonight,” said Satterfield. “He’s a really good athlete. But he’s an extreme competitor. Our team feeds off him and that’s what you want on a football team.”

Never one to take credit, Cunningham prefers to focus on others. “I couldn’t do what I do with out with my offensive line, running backs and receivers blocking down field for me. God has blessed me with the athletic ability that I have.”

Louisville did turn the ball over four times and Cunningham threw two interceptions. But despite the sloppy play the Louisville defense forced three turnovers.
“The passing game wasn’t working,” said Sattefield. “We didn’t throw the ball worth a darn.”

But the offensive line played one of its best games as the Cardinals ran for a season high 331 yards. “I challenge the o-line ever week to put us on their backs,” said Cunningham.

While the offensive line was blocking the defense held up limiting BC to 266 total yards, a season low. The defense this game. “They bailed us out,” said Cunningham.
Louisville next plays at North Carolina State (5-2, 2-1) Saturday, 7:30 p.m. The Wolfpack lost a tough decision at Miami, 31-30. Suddenly this becomes an even bigger game with Clemson visiting in two weeks followed by Syracuse and at Duke.

The Cardinals are now 4-3 (2-2 conference) and a second place finish in the Atlantic Coast Coastal Division is within reach.

Another interesting weekend in the ACC and nationally.

— Pittsburgh’s 27-17 win over Clemson stamps them as the favorite to win the ACC. The Panthers have a Heisman Trophy candidate in quarterback Kenny Pickett.

— A surprise Syracuse 41-36 win over Virginia Tech clearly puts Hokies Coach Justin Fuentes on the hot seat. It helps get the pressure off the Orange’s Dino Babers.