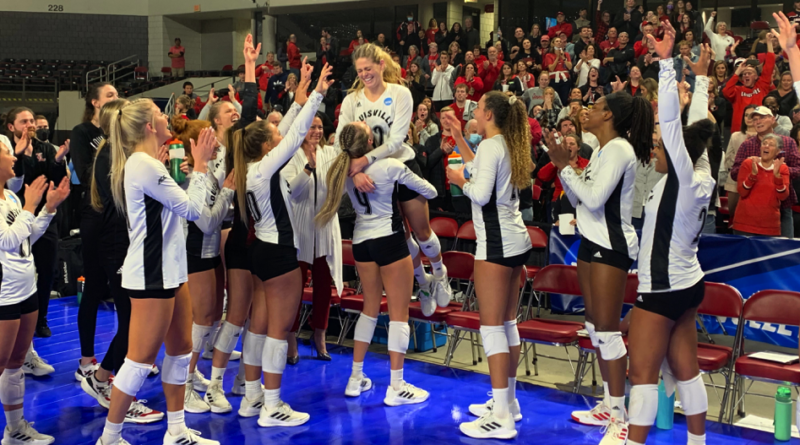 Tori Dilfer is hoisted in the air by teammate Claire Chaussee after being named Most Outstanding Player in the Regional (Mike DeZarn photo).
Volleyball
Charlie Springer 2 min read

Still making history, this University of Louisville Volleyball team. These highly focused, disciplined and talented women taking the program to the Final Four for the first time ever with an unblemished 32-0 won-lost record. Always smiling , never tiring, wanting something special for their university.

They say it’s not easy to beat a really good team three times during a season, no matter what the sport. But that’s exactly what UofL did Saturday night at Freedom Hall, defeating a strong Georgia Tech team for the third time this season.

When it really counted in the NCAA Regional championship, three sets out of four, scores of 25-18, 21-25, 25-21 and 25-20. Worthy of an ice water shower for Coach Dani Busboom Kelly, with Anna Stevenson raising the bucket.  Still soaking wet, Dani thanks the 5,917 fans on hand, saying she wants to win a national championship especially for them.

The Yellow Jackets led by a future pro in Mariana Brambilla with 27 kills and 16 digs. One scary player, intimidating actually. But the Cardinals with the talent to match, refusing to wilt under the pressure of repeated rallies. Hey, they’re making history, remember, and the Ramblin’ Wreck was in the way.

Tori Dilfer, the setter setting up most of those kills, was credited with a total of 49 assists. She also had seven digs and two service aces. She was named the Regional’s Most Outstanding Player for her considerable contributions.

“I’m just insanely proud of this team,” said Kelly after the celebration. “People don’t realize how hard it is to make it to the Final Four, especially when you have all the pressure and you’re supposed to make it there, that’s even tougher in my opinion.”

Louisville will take on Wisconsin in the semifinals at Ohio State next Thursday.