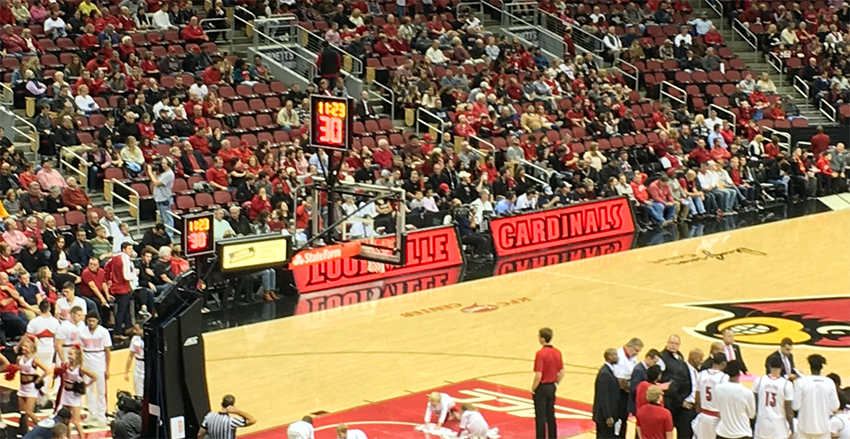 Lots of discussion on some sports talk radio shows about empty seats at the KFC Yum! Center for men’s and women’s basketball games. As if that is some sort of a surprise considering what has happened in the University of Louisville athletic department over the past few months.

The ironic part is that attendance for both UofL programs surpasses the vast majority of other schools for the same sport. Most of the concern seems to come from media people who haven’t paid for a ticket in years. Some are not native Louisvillians, and the younger ones certainly weren’t around when attendance was a legitimate issue.

Need to give UofL fans more credit. They've been through a lot but they've always been supportive.

The UofL men’s team is averaging 18,028 after the first five games while the women are attracting 6,078 after their first seven. Most basketball programs would be highly envious of those numbers. One suspects the analysts aren’t looking past the empties in the most expensive sections.

Still, one must acknowledge that attendance is down a bit, probably for a number of reasons. Significant fallout inevitably followed the stripper scandal and the FBI sting, including reactions to the abrupt departures of Rick Pitino and Tom Jurich.  Changes in the boards of trustees and in the University administration added to the discontent.

Attendance could also be affected by the fact that pre-conference schedules have never been that popular, with teams seeking to find their identities in  games against lesser foes. The basketball season begins earlier every year, directly competing for fans’ attention when the college football season is reaching its climax. Then, of course, there are the ever increasing cost of season tickets and contributions, sometimes forcing fans to make hard choices.

There’s also the attraction of big-screens TVs at home, which provide better views of the games than viewing them in person. Not having to pay $5.50 for a bag of popcorn, $7 for a Pepsi in a souvenir cup, or $8 bucks for a beer in a clear plastic cup.

Whether the dip in attendance is a problem depends on one’s perspective. There are still more occupied seats than there are empty seats, especially for the men’s games.  From one who attended games at Freedom Hall in the Sixties and Seventies where attendance averaged between 8,000 and 9,000, having attendance numbers at the KFC Yum! Center exceed 18,000 for most pre-conference games is never a bad thing.

Actually there are some advantages to fans for lower attendance, including easier access, better choices of seats, and shorter lines for concessions and restrooms. The people at lesser-attended games seem to be more knowledgeable and more loyal to UofL sports. Getting out of the parking garages after games is much easier as well.

Some, including Jeff Walz, the women’s basketball coach, have expressed disappointment in attendance, urging people to show up for games. The last time I looked, the women were averaging over 6,000 persons a game, a far cry from the 1,000 or so prior to the Angel McCoughtry era. My experience from the earlier days is that constantly encouraging fans to go out to games has rarely much of an effect. Even free tickets and $1 coupons didn’t help much in the Seventies.

Need to give UofL fans more credit. They’ve been through a lot but they’ve always been supportive. They are fiercely loyal when it comes to supporting the Cardinals, and they will be back soon enough. The conference portion of the schedules is just around the corner as well.

Meanwhile, enjoy the extra leg room, the greater availability of tickets and the ability to easily move to better seats while you can.