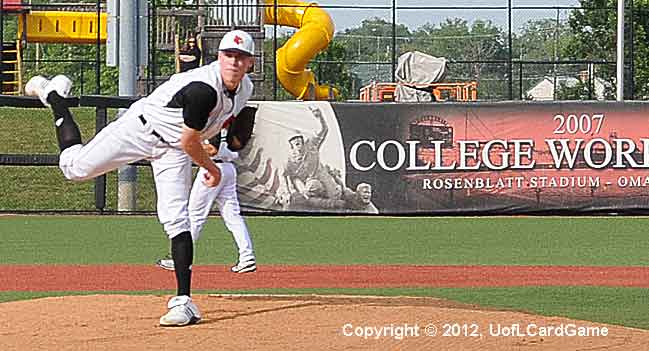 Justin Amlung allowed only three hits while striking out six to claim his seventh win in the first round of a decisive three-game series against St. Johns.

Justin Amlung wants a complete game and Dan McDonnell is tempted. But there is that base on balls Amlung gives up in the seventh inning.

McDonnell not taking any chances, with three St. John’s most powerful hitters, all batting .325 or better, coming to bat in the eighth inning. He will show confidence in his bullpen, specifically Travis Tingle who will allow only one hit the rest of the way.

A storybook start to the series on a beautiful 75-degree afternoon with more than 3,200 fans on hand. Louisville pulling to within one game of St. John’s in first place in the Big East race.

Ty Young, hitting like Ty Cobb, going four for four at the plate, driving in two runs. Adam Engel back in the starting lineup, robbed of a two-bagger by St. John’s shortstop Matt Wessinger, Zak Wasserman coming through with a double,  Stewart Ijames good for a single, maybe finding his hitting eye again.

Good start, but St. John’s doesn’t intend to go quietly.  Jeff Thompson (9-1) will start for UofL Saturday, and has other ideas.

The second game is scheduled Saturday at 11:30 but, because of the weather forecast for Sunday, McDonnell says they may play a doubleheader.

The observer plays a collateral role in this game, coming up with a foul ball that ricochets around the seats and into his eager hands in the third inning. 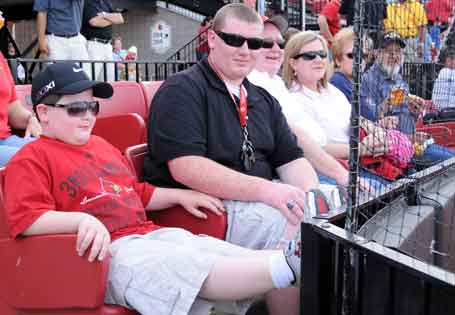 Enjoying the win behind home plate backstop were brothers Kyle and Matt Strong.