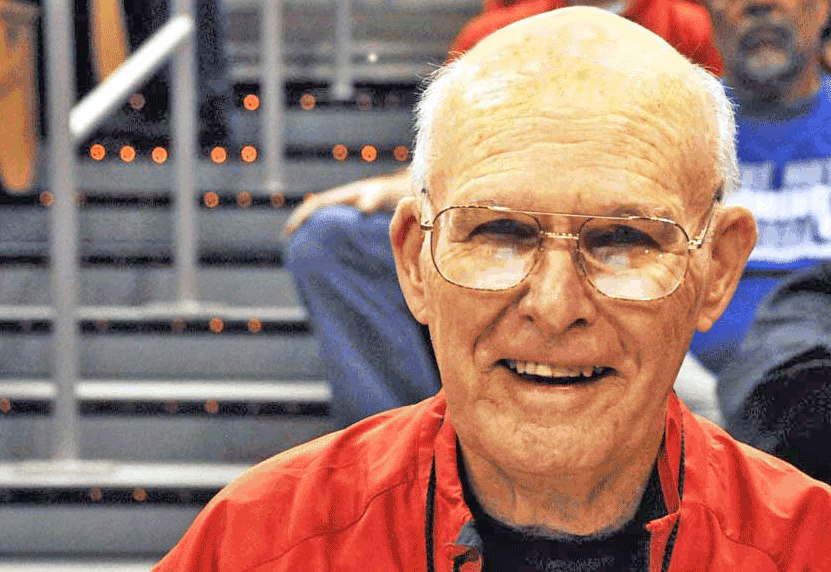 Al Benninger was there when Johnny Unitas entered his first football game as a freshman quarterback for the University of Louisville in 1951, remembers it well.

“The game was against Houston at Manual Stadium,” says Benninger, who graduated from UofL. “We had the ball on about the eight-yard line. Johnny threw a pass out of the end zone to Babe Ray that went 92 yards for a touchdown. It was incredible. We beat Houston 35-28.”

Al was also at Indianapolis in 1980 and Dallas in 1986 when UofL won its NCAA championships in basketball. “What a thrill that first championship win was, an unbelievable experience,” he said. “I got a little choked up on that one.”

Benninger was head of the UofL Stats Crew for 35 years, keeping track of official statistics for Cardinal basketball and football. His team has also been doing the NCAA Tournament, including regional and Final Four games, since 1969.

Al met his wife Mary while they were working at Lincoln Income Life Insurance. They were season ticket holders until 1960 when their son Glenn was born. “A friend of mine on the stats crew asked me if I wanted to sit at the press table, and I said, ‘Of course,'” he recalls. “When then Sports Information Director Les Moise left to take a teaching job, I was going to have to get to work.”

In those days the stats crew included six people, one on a typewriter for the play-by-play, two people providing him the scorers from the home and visitors teams, one for assists and turnovers, one for substitutions and minutes played, and the sixth for keeping shot charts.

“We were a little nervous about the technology in 1986. We wanted to do the Metro Tournament manually in 1985, but AD Bill Olson had spent $3,000 on a computer and wanted us to use the computer. We still kept stats manually as a backup for a while.”

Prior to 1969, Benninger says the host team always provided the stats crew for the NCAA’s Final Four games. “I contacted Tom Hanson of the NCAA, asking him if he needed a stats crew that year. “He told me if worked the Elite 8 game in Evansville, we could do the Final Four in College Park, Md.,” he says. “They liked our work and we’ve been doing it every since.”

His team also did the Orange Bowl stats from 1987 to 1995. “We got the job in 1987 when the commissioner of the Metro Conference became the executive director of the Orange, asking him if he needed a stats crew.”

Denny Crum once bet Benninger a steak dinner that the crew was mistaken about Scooter McCray’s rebound numbers in a game. “Denny thought Scooter had more than 10 rebounds, but we checked our numbers and couldn’t we find more,” he recalls. “We never heard back from Denny. Turns out he checked the game film and we were correct. We never did get that steak dinner.”

He recalls UofL’s overtime loss to UCLA in the 1974-75 Final Four as one of his biggest disappointments. “After the game, John Wooden announced his retirement. My first thought was, ‘Oh gosh, there goes Denny Crum from Louisville.’ We were really happy when he decided to stay at UofL.” He also remembers walking into the old Belknap Gym to find former UofL coach Peck Hickman sweeping the floor one day. “Coaches had to do everything in those days,” he says.

Benninger retired in 2006 but still has a seat on press row as an honorary member of the stats crew.