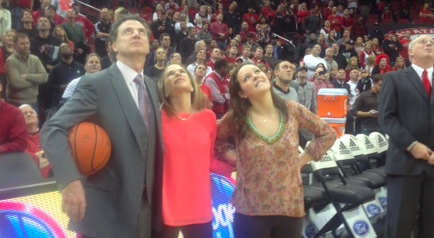 Rick Pitino is joined by his wife Joanne and and their niece Christine Minardi to watch a highlight reel on the KFC Yum! video board after notching his 300th win at the University of Louisville

Little doubt from the beginning Rick Pitino was going to win his 300th game at the University of Louisville, a game culminating in a 67-51 win over Cincinnati.

The visitors would manage to keep it close, pitching in five three-point baskets in the first half, delaying the inevitable, trailing by only four points at the half, 35-31. A Peyton Siva three-pointer at the one second mark just provided an omen that it was going to be a good night.

The Bearcats were still showing some vital signs, tying things up at 37-37 five minutes into the second half. But that was when Luke Hancock would get to work, hitting a floater for two, following up with a three-pointer, making an assist to Chane Behanan, and swishing another three-pointer after a layup by Russ Smith.

Not a great game, but a feel good night. The technicians at KFC Yum! Center had a Pitino highlight video ready to go minutes after the 67-51 win over Cincinnati.

“There is no place, outside of Heaven, I’d rather spend 300 wins at than with you people,” he told the majority of the 22,739 fans who hung around for the celebration.

One thought on “A feel good night, Rick Pitino wins No. 300 at Louisville”