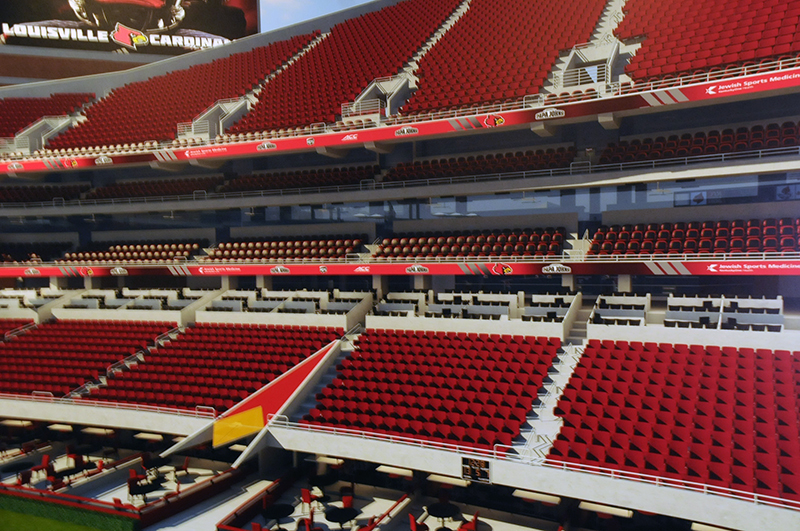 Many more details were made available on the $55 million expansion of Papa John’s Cardinal Stadium during a press conference on Thursday. The latest project in the University of Louisville’s commitment to having the best facilities in the Atlantic Coast Conference.

Pepsi is in for $5 million. Planet Fitness for $3 million. The fundraising campaign is in high gear now, with Tom Jurich eager to get to the groundbreaking as soon as possible.  With $8 million already in the proverbial bank and with other donors already reviewing their budgets, the campaign is off to a fast start.

Mark Jurich, son of Tom and senior associate athletic director, said the project has received an enthusiastic response from local corporations. He described the end zone addition as Crunch Zone 2.0, saying it would significantly enhance the fan experience at the stadium. “Support for the concept has been overwhelming in the community,” said Mark.

The 10,000-seat expansion will include 1,000 club seats, 70 premium boxes, and 12 exclusive field level suites. They will provide access to the exclusive Pepsi Club gathering area, similar to the existing B&W and PNC clubs on the east and west sides of the stadium.  It also will include a walkway connecting both sides of the stadium, making it accessible to all UofL fans.

The Howard Schnellenberger complex will be expanded as well, with an additional 40,000 square feet that will double the weight and training facilities. New meeting rooms and recreational areas, including a movie theater, will be available to the football players.

“As important as this project is to our department, we want to get it done as soon as we can,” said Mark.

Tom indicated that construction would take at least two years to compete and would not cause any disruption with home football games.  Although he would like to have it done in time for the 2018 season, he has little doubt that will be done for the Notre Dame game that kicks off the 2019 home schedule.