Looking down the road, navigating that collision course.

The University of Louisville Athletic Association has entered into discussions with football coach Bobby Petrino’s to extend his contract on a long-term basis. Terms are being negotiated by the attorneys, but UofL fans are eager to have Petrino around as long as possible.

Petrino signed a six-year contract with an annual $3 million salary in 2014. Since then, he has had two stellar seasons, including a 9-4 finish in his first year and an 8-5 mark last year. 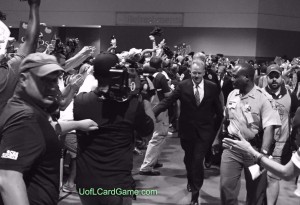 On extending Petrino’s contract, Tom Jurich, vice president of athletics, said, “I just think he has done a great job.”

“He’s exceeded all my expectations when we brought him back. I knew he had a difficult proposition in front of him – certainly not from a talent standpoint – when he got here, but moving into a new league was a big upgrade for us.

“I’m very pleased with the direction we’re going, and I think we’re really poised for a great future with him.”

The Cardinals have high expectations on the heels of last year’s 8-5 season and the Music City Bowl win over Texas A&M. Louisville  has been included in numerous preseason top 25 forecasts. However, the most backed teams don’t always win, raising the possibility of UofL making it into the playoffs.

Again next season, the toughest two opponents in the Atlantic Coast Conference are included among the first five games – Florida State on Sept. 17 and Clemson on Oct. 1st.   They, along with Houston, are considered national contenders.

“We have six teams who played in bowl games last season and three teams that finished the year ranked in the top 25,” said Petrino in a statement to the press.

He welcomes the challenges, however. “We have a lot of work to do before we start playing games, but with an experienced team returning, they understand the challenges ahead of them and know what preparation is needed to be a successful football team.”

Louisville will kickoff the 2016 season against Charlotte on Sept. 1 at Papa John’s Cardinal Stadium.