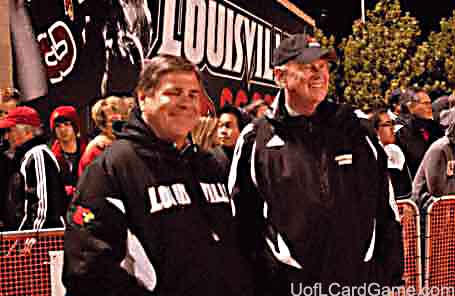 Predictably Jim Ramsey is in the crosshairs of some angry University of Louisville fans for inflicting a self-imposed post-season ban on the basketball program. Some calling for him to be fired, believing his actions were premature and overreactive.

As good as Ramsey has been for the University, the man has earned the right to be respected for seeking to resolve a very difficult situation. The healing had to begin at some point, the sooner the better.

The full results of the investigation won’t be known for several months. Ramsey is the person charged with the school’s overall well-being. As the chief executive, he is expected to make the hard decisions. Having seen the facts, he had no choice but to follow through on his instincts. That’s what leaders are expected to do.

The athletic program has been a great source of pride for Ramsey, as has the school’s impressive academic and facilities growth in his 13-year tenure, in which the endowment surpassed $1 billion for the first time.  He is a hands-on leader, loving the work, treasuring the University, taking it to new heights. He has always been highly visible across campus and at athletic events.

He may made a few mistakes, and others have made mistakes that reflect upon his leadership. But that comes with the job. Fortunately, he has some thick skin, able to absorb criticism while still enabling the University to achieve one milestone after another.

The decision to self-impose a ban on post-season tournament had to be extremely difficult for him. But there should be little doubt that he is doing what he believes is best for the long-term future of the University. That is his job, after all, and he’s done it well. Rushing to judgement to condemn Jim Ramsey when he’s the person best informed of what actually happened in the basketball controversy is foolish.

Whether or not he decides to stick around with all the chaos that will occur over the next few weeks and months, Ramsey has embraced his leadership role in ways never before imagined by the community. He has set the standard for leadership at UofL that his successors can only hope to emulate.