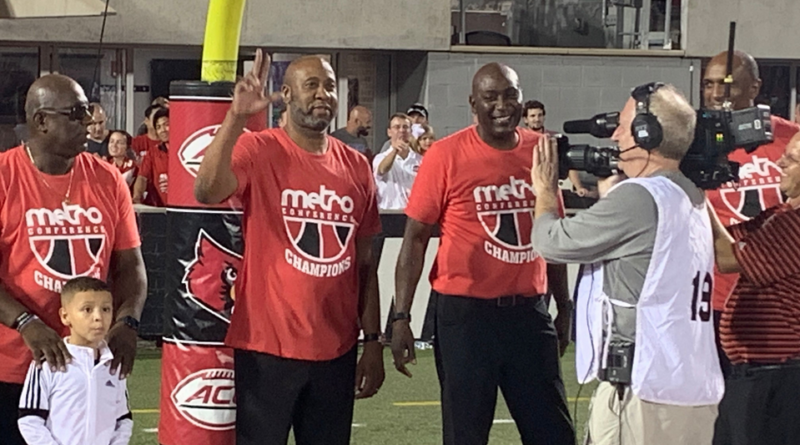 Cardinal Stadium was the scene of an historic reunion on Friday, with the University of Louisville hosting members of the 1985-86 NCAA tournament team. A time to pause and salute the players who brought a second national championship to Louisville 35 years ago.

Coach Denny Crum was on hand, of course, receiving one warm embrace after another from the former players. Lots of memories shared of that April weekend in Reunion Arena in Dallas by players from a basketball program that dominated college basketball in the Eighties. UofL had won its first title in Indianapolis six years earlier in 1980.

They were also introduced at the Louisville Live event for the current basketball team, greeting fans and signing autographs, making the connection between greatness of past programs with the aspirants of future success.

Another popular visitor at the UofL-Central Florida football game was Angel McCoughtry, who led the Louisville women’s basketball team to the championship game of the 2009 NCAA women’s basketball tournament. The former UofL All-America player has since made a name for herself in the Women’s National Basketball Association, the number one draft pick playing with the Atlanta Dream for 10 seasons, before being traded to the Las Vegas Aces.

She has played during the off-seasons overseas in Turkey, Slovakia, Lebanon, Hungary and Russia.

Also on hand was the ever-popular Montrezl Harrell, a member of the 2012-13 national championship team, enjoying the game with McCoughtry and NBC Sports personality Maria Taylor. Harrell, who was banned from UofL events for a bit by the NCAA after the title was removed, said he was just happy to be home in Louisville again.

Also showing up for the Louisville Live event was Jeff Hall, a sharp-shooting guard from the 1986 championship team. He could have been one of the best 3-point shooters but the 3-point line was not introduced until the next season.

One thought on “1986 National Champs honored at Cardinal Stadium”