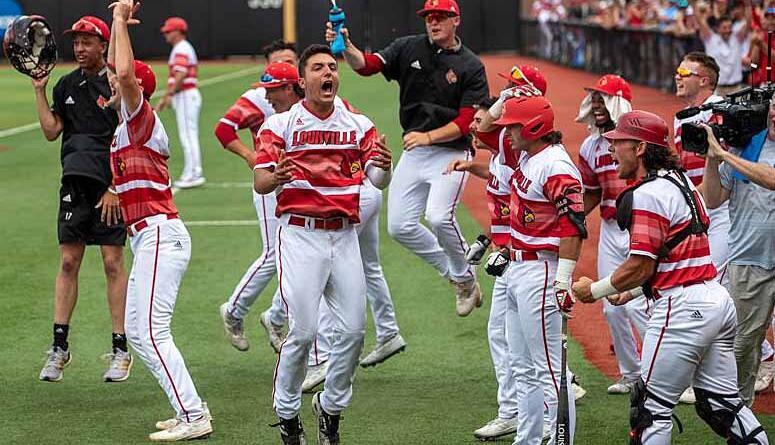 The memory that will linger from the 2022 NCAA baseball regional at Jim Patterson will be that vision of Cameron Masterman jumping in the air, his arms extended high above his shoulders. That ball he clobbered sailing out of sight into the bleachers on the left field berm.

A guy who aims for the fences on every swing, going more than a month without a four-bagger, the team leader in strikeouts with 69 whiffs. More likely to go down swinging than reach base, it seemed lately. Ending the slump and all the frustration, best possible time. Four home runs over the weekend, including the big one, No. 18 of the season, but the one many University of Louisville will relive in years to come.

The one that will endear Masterman forever to UofL fans, lifting the Cardinals to an 11-9 win over Michigan in the championship game, sending the UofL to a Super Regional for the ninth time in Coach Dan McDonnell’s 16-year tenure in the Ville. Louisville forced to win three straight games after losing the second game to Michigan on the second day of the tournament.

Jack Estep, the kid who chased down the ball, knowing how much that blast meant to the Louisville leftfielder, asking Masterman if he wanted the ball back. Masterson thanking him, but declining, choosing to autograph the ball and the youngster’s cap. The stuff of dreams for a now forever fan.

A memorable game, too, for junior catcher Dalton Rushing, in probably his his last appearance at Jim Patterson Field, with four hits, including a double, two runs batted in and four runs.

Centerfielder Levi Usher, a senior, continuing to contribute, noteably that double for two runs in the eighth inning to tie the game at 9-9, setting the stage for Masterman’s heroics. Usher would score on the Masterman decider.

An exciting team, featuring a number of players still learning and growing, hoping to tap into considerable potential. Hoping to catch fire, make a run for Louisville’s six appearance at the College World Series. But their dreams extend far beyond just making it to Omaha. Getting there will never grow old, but a little more luck would be nice in achieving the ultimate goal.

One thought on “18th home run huge for Masterman and Louisville”