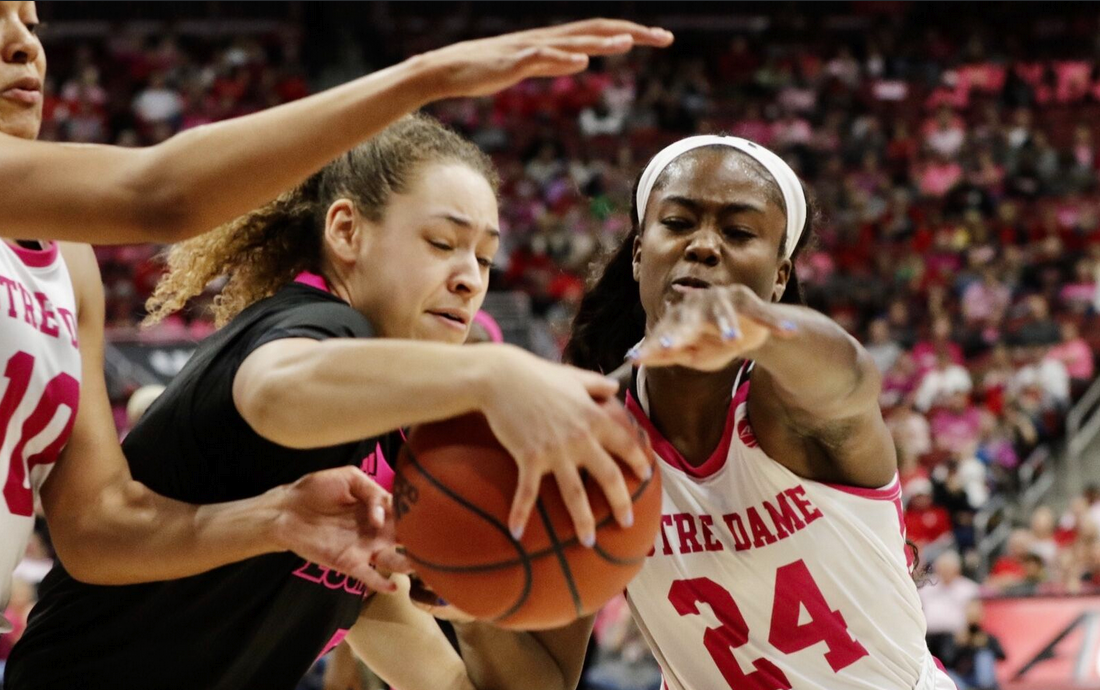 Probably at least another season before the rivalry between the University of Louisville women’s basketball team and Notre Dame becomes unpredictable and scorching hot again. For now, however, UofL fans are content to enjoy still another 30-point-plus win over the Irish.

Some 12,086 people showing up at the KFC Yum! Center for the “Pink Out” on Sunday to see Coach Jeff Walz’s Cardinals coast to an 82-49 win over Muffet McGraw’s Irish. Just three weeks ago UofL had shellacked Notre Dame 86-54 at South Bend.

Notable that post-game “handshakes” are always interesting, with the coaches barely making incidental contact. A wonder if the hands connect at all, because the coaches haven’t made eye contact in a couple of years. Pre-game formalities are out of the question.

Should have been competitive, with Louisville having lost two of its last three games and Notre Dame winning three of four since the January to the Cardinals. And it was competitive for a while, at least during the early going, with UofL clinging to a two-point lead at the end of the first quarter.

Louisville would quickly take control in the second quarter, with Mykasa Robinson finding Yacine Diop early and often on four assists for eight points. Owning a 40-26 lead at the intermission, never to be seriously threatened again.

A much smoother experience with Elizabeth Balogun in the lineup, the UofL sophomore adding 11 points, three blocks and an assist. A favorite with her teammates, sometimes needing encouragement from Dana Evans to shoot the ball. Evans, meanwhile, leading all scorers with 18 points, including four 3-pointers and seven assists.

“We never lost any confidence during the losses,” said Walz. “Overall I am very pleased with where we are today. I know how good our team is when we’re at full strength. When you lose some people for a few days, it can have an impact.”

Mykasa Robinson may some day in the future be the leading scorer in a game but for now she seems content to prefer playing defense and finding her teammates. Making a total of nine assists while grabbing seven rebounds and adding six points.

Robinson always cool running the offense, the first on the floor for a loose ball, and inescapable on defense. Nothing gets by her or past her, constantly  in motion, pure energy. The spark never goes out and it’s contagious. Twenty-nine minutes and 45 seconds of excitement on Sunday.

McGraw admitting her troops were not ready for Louisville, with her team committing 23 turnovers. “We could  not compete with them, they’re the best team on our schedule,” she said. “We’ve still learning, and it could take a while.”