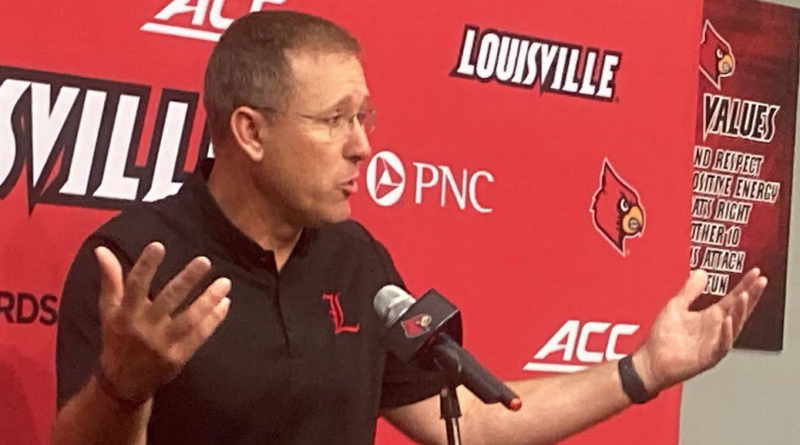 Scott Satterfield eager to get off to a good start with a win over Syracuse (Charlie Springer photo).
Football
Ed Peak 2 min read

The University of Louisville football team has had great success against Syracuse the last three seasons. The Cardinals cakewalking past the Orange by a combined total of 127 to 37 points. But those games were at Cardinal Stadium. Saturday night’s season opener is in the Carrier Dome in New York.

“It’s huge,” said UofL Coach Scott Satterfield. “Going on the road to get an ACC conference win. It would be big time. You have to start off on a good note. I’m sure Syracuse is saying the same thing. You don’t want to get in a hole the very first week.”

Louisville last played in the Dome in 2018 and the Orange put a whipping on the Cards 54-23. It was Coach Bobby Petrino’s last game as head coach. Overall, UofL is 13-7 versus SU, including 5-4 in the Dome. That’s history and means zero.

Vegas Insider has Louisville 3.5 poi nt favorite but first game predictions are based on little substance and don’t account for the noise levels of a Syracuse fan base in the first game of the season. Syracuse fans are always raucous until they are squelched.

However, this is not the same Syracuse (5-7) team that limped into Cardinal Stadium a year and lost 41-3. Running back Sean Tucker is one of the best in the ACC returns. Quarterback Garrett Schrader is a running threat as well. “We know they are going to turn and hand the ball off to one of the top running backs in the country,” said Satterfield. “Shrader is a great runner as well.”

The fact that the Orange are opening at home in a conference game is an advantage. “It’s the first game and it’s their place,” said Satterfield. “I know it’s going to be loud, and it’s a nasty enviroment. It’s going to be a big challenge.”

The Cardinals hope to unleash an offense that averaged 31.6 points a game last season should be even better. It has a solid offensive line, senior Malik Cunningham at quarterback and a deep stable of running backs.

Last season the defense, especially the secondary, had glaring weaknesses. This season it should be improved with the the return of tackle Monty Montgomery and defensive back Kei’Trei Clark. “I think we have a lot more pieces to the puzzle in the secondary,” said Sattefield. “We can move guys around on the backend.”

A win could be a huge springboard into what Satterfield describes as one of the toughest schedules in Louisville football history.