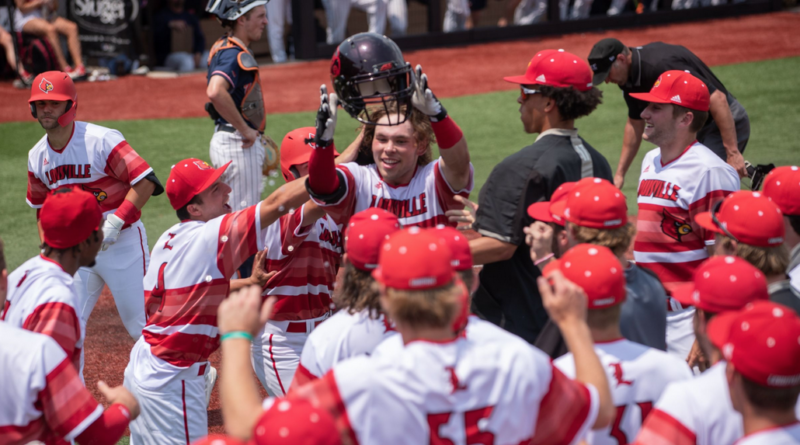 Back where the Cardinals belong after winning two out of three weekend games against Virginia.

Right-hander Carson Liggett and lefty Tate Kuehner setting the tone, holding Virginia to six scoreless innings before the Cavaliers score two runs in the seventh and one more in the eighth. Lefty Michael Prosecky locking the door in the ninth. Louisville wins 11-3, repaying the Cavaliers for an embarrassing 16-7 loss on Friday. Right-hander Jared Poland had gotten the Cardinals off to a good start, with help from Prosecky in a 4-1 win on Thursday.

Isaac Humphrey hit a towering solo homer in the seventh, and Ben Metzinger plated a run in the eighth with a run-scoring double. Dalton Rushing capped off the day with a two-run homer over the center field fence, his 19th of his junior season.

A few ups and downs during the season but it’s baseball and anything can still happen.  Louisville wrapped up the regular season at 38-16-1 overall and 18-11-1 in the ACC.

Make that the No. 2 seed in the upcoming conference tournament. Louisville will open play on Wednesday against Pitt before taking on Georgia Tech on Thursday. Both pool play games are scheduled to begin at 11 a.m.  Teams in the pools will play one game against each of the other two opponents in its pool Tuesday through Friday. The four teams with the best records in their pools will advance to Saturday’s semifinals.

The winners will meet Sunday in the ACC Championship Game. If the teams are tied at the completion of pool play, the team with the highest seed in the respective pool will advance.